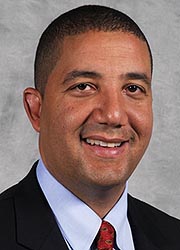 Governor Hogan has announced Keiffer J. Mitchell as his new Chief Legislative Officer succeeding Christopher Shank, who held the position since 2016. Mitchell has served as senior adviser to the Governor since the beginning of his Administration.

From the Governor’s press release,

Keiffer J. Mitchell, Jr. served in the House of Delegates from 2011-2015, representing District 44 in Baltimore City, and he served on the Baltimore City Council from 1995-2007. He was a member of the Baltimore City Democratic Central Committee as well as the Maryland Democratic State Central Committee. Mitchell is part of a storied Baltimore family. His father, Dr. Keiffer J. Mitchell, Sr., was the first African American doctor to practice at Greater Baltimore Medical Center. His grandmother, Juanita Jackson Mitchell, was the first African American woman to practice law in the State of Maryland. His grandfather, Clarence M. Mitchell, Jr., was an NAACP lobbyist and civil rights adviser to President Lyndon Johnson.